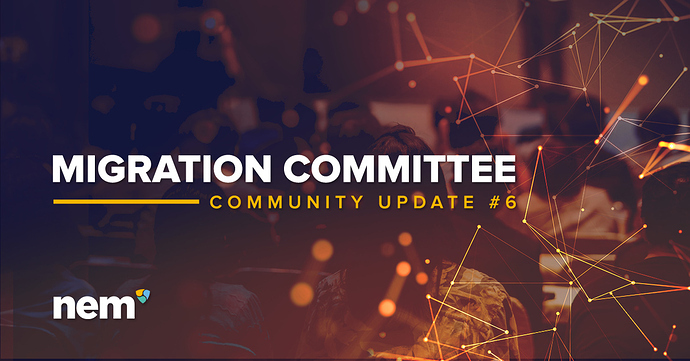 image.jpg1200×628 240 KB
This is a joint message for our community on behalf of the Catapult Migration Group, comprised of The NEM Foundation, NEM Studios, NEM Ventures, and Tech Bureau Holdings.

The migration team is proposing that every account has to opt-in to receive Catapult tokens. This includes multi-sig and non-multi-sig accounts. Accounts won’t receive Catapult tokens or multi-sig configurations until they opt-in. Accounts can opt-in either before or after public chain launch. For those who wait until after launch, their Catapult tokens will be held in a custodial account until they are claimed when the owner opts-in. The process/entity for managing these unclaimed tokens has not yet been defined. After a specified period (6 years is the current assumption,) the proposal is to burn any unclaimed Catapult tokens remaining in the custodial account.

Progress involving revolving the front end development are as follows:

The NEM Studios developers have nearly completed Fushicho 2 Server compatibility changes. REST and SDK teams are making final changes for F2 and will provide the latest release early next week.

Review and Testing: The next phases of testing are beginning including new performance testing and penetration testing by a third party, as we begin the open bug bounty program on the security review platform HackerOne. These efforts will continue through release time.

The goal is to have a brand proposal to share with the community mid-December.

Various members of the community, migration committee, and supernode holders group have expressed ideas/preferences. At present this information is being collated with a view to making a recommendation from the Migration Committee.

As a snippet of the general direction - the approach is likely to recommend:

The details of these will be shared in as below but feedback from the wider community, supernode holders, core team and migration committee all combine around these points.

The latest release of the Desktop Wallet is v0.8.8

Just a reminder for those unclear on Opt-In that there is a video that is helpful and gives high-level overview here --> https://www.youtube.com/watch?v=_LShCAb4_9I&feature=youtu.be. 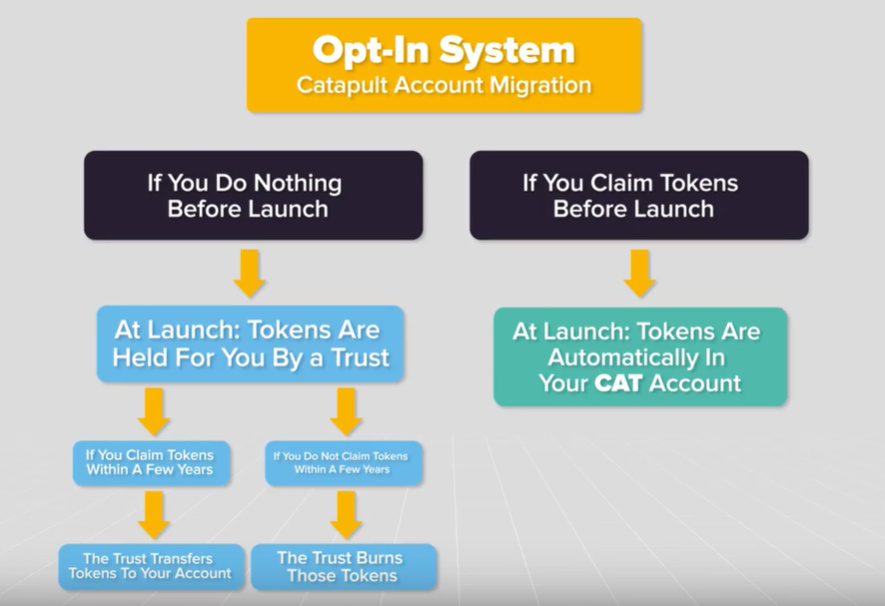 Regardless of whether I choose to join or opt out, I will respect the team’s decision if it is finalized.

I’m in the same boat. I prefer opt out but still respect the decision for opt in. The devs also prefer opt in from what I understand, given that we are treating catapult as a new product.

I would respect the recommendation to opt-in as well but would like a better understanding on the rationale behind a blanket opt-in vs opt-out for non multi-sig and opt-in for multi-sig.

Granted, this is a new chain and product launch altogether and there should be clear differentiation with NIS1 and other factors to consider.

If the community has any thoughts, this forum would be the best place and I believe the final decision is not made yet.

Other than that, glad to know the details are being worked out for the exchange outreach, branding and tokenomics.

I know this is frustrating for you (and some others in the community.) To be clear, though, the migration team DID discuss/consider the community’s feedback (as well as partner feedback, legal feedback, and Core Devs feedback) around Opt-In/Opt-Out.

It wasn’t a unanimous decision but it was a fair decision that the entire migration team is supporting. It’s going to be impossible to make everyone happy on this.

This will be discussed more in the migration proposal coming soon but from the notes in the past migration committee, this was some of the high-level considerations:

Opt-In:
Migrate fewer accounts, but those that migrate are more actively engaged, requires user interaction which gives possibility for things like acceptance of white paper, dev contract etc explicitly, can be done relatively quickly because you can always opt-in later without the claim period pre-launch impacting you (miss opt out and you are opted in, opt in - only thing you miss was getting tokens on day 1 instead of when you opt in). May have some tax repercussions (ex. Germany) because there is an active opt in, in other jurisdictions means you can manage that individually more easily. IRS guidance doesn’t really cover this one.

Tax guidance for both opt-in and opt-out was “patchy” - guidance from the accountants anecdotally is there is an argument to treat opt-In like a Share Split or exercising of rights that are embedded within the XEM token you hold, so not an airdrop, an exercising of rights you have paid for. Conversely though, if viewed as an airdrop it could be income. Initial value plays into this calculation and there is concern in Japan particularly that NIS1 will represent a capital loss right now, capital gain on Catapult will then be 0 to whatever you sell at, but can’t carry losses forward there, so capital gain appears higher than it should be and in fact may be a net loss that needs to be partially declared as a gain in the end. It gets very complex.

Opt-Out:
Migrate more accounts (including dead ones), doesn’t require user interaction unless you don’t want to be included, may incur legal/tax issues for people who are not engaged enough, need to define an appropriate opt-out time before we can launch, probably feels more like a conceptual upgrade even if its not a technical one. May have some tax issues (Ex. US, Aus and Japan) because you received effectively air drop like tokens, to which you have the private keys, this is unclear though at present in regulations (including IRS.)

Final takeway for migration team: legal analysis and technical options were weighed / debated and the migration committee felt Opt-In was the best choice to move forward with.

Let us know if you have more questions.

Hello, I have a question about the opt-in process. As I understand, there will be a snapshot of NEM balances as a basis for the Catapult opt-in (pre- or post-launch). Is there already a date or block height specified for this or will it be communicated?

Thank you in advance!

We don’t have the date as of yet. We will communicate the date of snapshot across all of our channels (social media and the forums) as soon as we have it.

The process/entity for managing these unclaimed tokens has not yet been defined.

For Opt-In option, a very large amount of Catapult tokens will be stored on Trust account. It’s very important to secure this account properly.

The process/entity for managing these unclaimed tokens has not yet been defined. After a specified period (6 years is the current assumption,) the proposal is to burn any unclaimed Catapult tokens remaining in the custodial account.

6 years later,
Importance is given to the Burn address.
Are you thinking about that?
Did you check for problems in the NEM ecosystem?

The burn address would be the Genesis account. This account cant harvest and the coins would become inaccessible, so the importance everyone else has would be a greater percentage of the total available importance, meaning security of the network would be unaffected.

I don’t agree the Migration Committee is supposed to be the group of people taking a decision about the Opt-In / Opt-Out choice. The choice between Swap and Allocation was allready enforced onto us and the community without a POI vote. Based on the communication of the Committee so far, I don’t trust any choices made by that group.
I don’t agree with this so-called decision to support Opt-In. The SN-owners group was created to collect feedback and opinions from important community members. In the SN owners telegram group, it was obvious the majority was prefering Opt-out. It can be assumed the community prefers Opt-Out as well. How is it possible to come to another conclusion? How is it possible to even consider an obvious controversial conclusion without putting this question into a POI vote? Time constraint? Ok, but go with the choice of the majority then.
I want Opt-out and if not, I will only accept Opt-In if supported by a community POI vote.

the migration team DID discuss/consider the community’s feedback (as well as partner feedback, legal feedback, and Core Devs feedback) around Opt-In/Opt-Out.

This clearly means the community feedback was not considered as being important enough. Again, POI vote is now clearly required to make this choice.

I’m sorry in advance, but there will be truthful words below, but in a harsh form.

Technical points cannot be put to the vote at all! Why not? Such questions should be discussed only among developers and people who understand all the advantages, disadvantages and risks of this or that decision.

What name do you prefer as the official name of #catapult? カタパルトの正式名称としてはどの名前を好むのですか？

Jaguar started the vote three days ago. As you can see, 35% want to see the name “Catapult”, but this is impossible because of the trademark. Alexander and Laura have already talked about this before. But as you can see, investors want what cannot be.

Technical issues should be discussed and decided exclusively by competent people and not by a handful of investors “when the moon? when lambo?”. In the end, all responsibility will be solely with the Migration Team, but not with the community. In this case, there is no room for a decentralized solution!

I’m sorry, but I don’t understand the point of your reply at all. Unless, you’re not really replying to my message.
My remarks in my previous messages were not about a technical point. The Opt-In/Opt-Out choice is about how it should be done, a question about what procedure to follow. Both are technically possible.

I did not mention anything about the name or the work of the branding committee. So I don’t see how that has anything to do with my remarks.

And I undestand you might consider some to be incompetent, but I believe I’m not one of them

Not all responsibility is with the Migration Committee.
There is and should be room for a decentralised decision making process, although I must admit it probably requires some courage.