Migrating Away from Ethereum 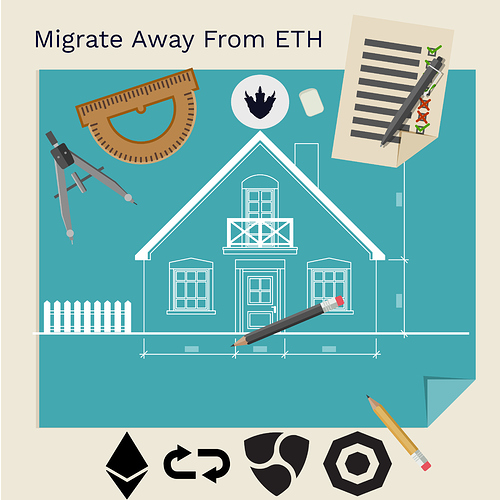 550_architectural.jpg4419×4419 2.13 MB
Decentralized projects that previously launched ERC20 tokens on Ethereum have started to migrate away from the smart contract giant after concerns over the scalability and congestion issues on the platform. It is an acceptable assumption that most blockchains startups gravitate to Ethereum. That is mostly due to to the abundance of developer documentation available for ERC20 tokens.

Another reason why Ethereum has gained popularity is due to how easy it is to host an ICO on the platform. However, most startups are unaware that there are better projects that offer simpler tokenization and rubust infrastructure. Once these projects mature or encounter issues due to the limitions of Ethereum they favor their own mainnet or a different token.

A pivotal time in Ethereum’s history is when dapps such as CryptoKitties were unleashed. A simple game that resides on the ETH blockchain that allows users to play a game centered around virtual cats became infamous for congesting the ETH blockchain. Even though scalability is a main concern, other projects like EOS and TRON have always intented to create their own native blockchains.

What options do projects have that want to stay ahead of the curve and want to be more independent or migrate to a more versatile platform? There are several platforms that tout scalability, ease-of-use, and security. However, there are two that we would recommend depending on the aspect of the blockchain that you require — NEM and Komodo.

By definition an MVT is a digital token that resides on a blockchain. On NEM, these are called Mosaics. These are similar to colored coins (custom currencies) in bitcoin, but is done completely on chain, rather than requiring the trust of a third party. The names of these colored coins are based off of namespaces, which are similar to how domain names work on the internet. Once a namespace is created, no one can claim the same one, and the owner can make unlimited subdomains.

Tokens in the NEM ecosystem can represent any fungible tradable good: coins, loyalty points, gold certificates, IOUs, in-game items, etc. Since all Mosaics implement some basic features in a standard way, this also means that your token will be instantly compatible with the Nano wallet and any other application that is compatible with the Mosaics such as NEMpay.

There are some advantages of launching a token on NEM. The platform uses a a consensug algorithm known as PoI or proof-of-importance. NEM is environmentally friendly, and very secure. Some of the features included are encrypted messaging

Universal api — rich documentation and no complex development for dapps

Blockchains are different than tokens. Mainly because they don’t reside on the parent chain. That means that a native blockchain completely independent — which is the main advantage of KiCs (Komodo independent Chains). To put this into perspective, if you launch an ERC20 token on Ethereum you will need to pay GAS to send coins. If the network is congested your transaction costs are increased. This can cause a problems. On the other hand, any event that takes place on the Komodo chain does not affect any of the KiCs. Furthermore, a KiC doesn’t pay transaction fees in Komodo — which means your transaction costs will remain stable.

Even though Komodo chains are independent, they are interoperable at all levels. That means that a project can launch a blockchain that is decentralized and independent but is still integrated into the Komodo ecosystem. These features include

HyperDEX — the world’s most advanced DEX

ChainZilla helps your project migrate away from Ethereum

ChainZilla makes the migration away from Ethereum a straight forward process. The first step is to determine if your project needs a token or a blockchain. Our team of specialists can launch your new blockchain and apps in 4 weeks. We offer managed migrations and DIY solutions. Our blockchain as a service solutions include:

Anyone that refers a project to us qualifies for a 10-25% fee of the total cost of the blockchain package. Contact one of our representatives if you know a project or business that wants to launch a blockchain or migrate away from Ethereum.