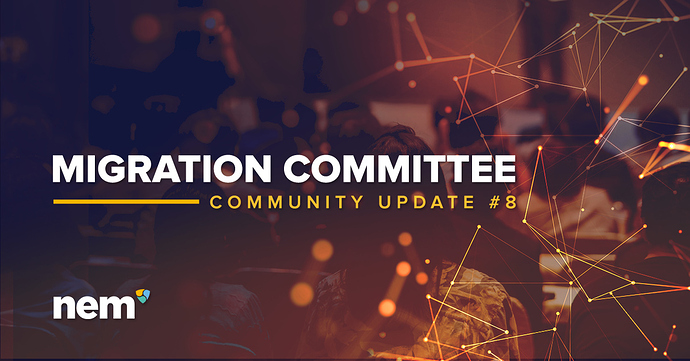 The migration team is proposing that every account has to opt-in to receive Catapult tokens. This includes multi-sig and non-multi-sig accounts. Accounts won’t receive Catapult tokens or multi-sig configurations unless they opt-in. Accounts can opt-in either before or after public chain launch. For those who wait until after launch, their Catapult tokens will be held in a nominated account until they are claimed when the owner opts-in. The process/entity for managing these unclaimed tokens will defined and communicated prior to launch. After a specified period (6 years is the current assumption due to statute of limitations) the proposal is to work with the community to decide what should be done with the unclaimed tokens - likely to be either a Burn or a Block Reward distribution.

What has been done:

(deepening communication with top exchanges that are currently listing XEM).

The brand proposal is slated to be available to the community on the 19th December 2019. There is a risk we will miss that date due to trademark feedback from legal team. We are expecting to hear back from our legal team by the end of the day, Monday December 16th.

Various members of the community, migration committee, and supernode holders group have expressed ideas/preferences. This information and various modelling has now been completed and compiled into a concrete proposal which has been reviewed by the Migration Committee and Core Team. It is broadly accepted with some minor suggestions and has now been shared with the SuperNode holders group prior to being shared more widely by 9th Dec 2019. It has been shared with the SN group first because the SN Reward Program will undergo some substantial changes and their input is required to ensure it is well understood and agreed prior to becoming a formal public proposal. Early feedback is positive and the proposal will be shared publicly before the 9th Dec if practical.

Any update one this? I don’t see any release with above dates. Can anyone explain please?