We would like to do an update post-Symbol launch on the state of reserve funds. As a brief summary, leading up to the launch of the Symbol network, the old NEM Core Team voted to set up a Trust in Gibraltar to settle the Core Funds for the launch of Symbol. That goal was successfully accomplished on 16/17 March 2021 (depending upon your time zone). The name of the Trust is The NEM Group Trust (the “Trust”).

Our NIS1 Funds can be found on the block explorer at the following addresses:

A record of settlement into the Trust at the Symbol launch and all its current accounts can be found here: http://report.experimental.symboldev.network/ where trust funds are designated in line 1.

The five trustees of the Trust are:

Jeff has decided to step down as trustee by 30 September 2021.

The purpose of the Trust, as set out in the deed establishing it, are “to support and develop the NEM ecosystem, its associated blockchains, native currencies and technologies”.

Up until this time, the Trust has been able to safeguard and protect the reserve funds, stake non-harvesting nodes on the Symbol network that collect no block rewards but help to secure finality, fund the NIS1 Supernode program, and have some oversight of NGL activities.

As many of you know, NGL is shutting down and the core developers are setting up a new organization. The Trust has agreed to fund a developer fund to be managed by Jaguar and Gimre for them to fund their new organization. We have voted to award them approximately an amount of 1.2B XEM and the corresponding amount of approximately 770M XYM to a foundation they are setting up in Switzerland. In addition, the Trust has agreed to cover the developer fund’s first year expenses and to provide additional funding after it is operational and compliant with all applicable laws.

This first major expenditure of the Trust falls in line with its mentioned purposes.

At this time, it is not foreseeable in the next year that the Trust will be accepting additional applications from the community for funding as the core developers set up their new organization. We have confidence in their ability to lead us through the next phase of this stage in the life cycle of NEM and Symbol.

Sincerely the Trustees of the Trust,

That is not what is on the table.

Why do you continue to control NEM accounts? What kind of function or added value can we expect?

It states that all the funds will be given to the core devs, they just need to show that whatever they decide to do is done properly. the trust is safeguarding the funds, to protect the ecosystem, and fund the core devs initiatives, as well protecting the community.

so where is the problem?

There is no problem, it is basically an update, as per the title. letting everyone know what is happening in the ecosystem.

There is no problem, it is basically an update, as per the title. letting everyone know what is happening in the ecosystem.

That is not happening. We’ll keep you updated.

thanks i update myself

That is not what is on the table.

Ok, but then please describe what the situation is and what is on the table.

That is not happening. We’ll keep you updated.

Ok, could you please inform us where we should be looking to make sure we don’t miss any of such updates. Thanks in advance.

So, please keep us updated ASAP. To be honest, it is hard to see still some labour pains and never ending changes in NEM/Symbol after so many years. I know, that we are in rapid growth enviroment but still…

What’s the latest update here?
This thread started off with a clear update but then went through confusion into reversing back. In case there was (transparent) discussions happening over in Discord, you could perhaps share the link to the respective threads/messages.
Greetings from LuxTag

@chopper71 @gimre How did the “negotiation” go?

Info would be nice… 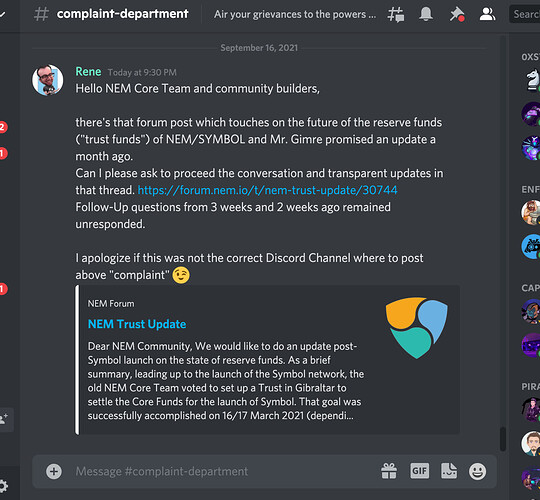 The new active NEM&SYMBOL leaders are probably more active at Discord. I have asked over there to please proceed and respond in this forum thread.

and just starting this week … there is a hardfork ?

I am seeing many red flags in project management since Kristie joined xD But this is only my opinion, right

There was a hardfork to fix a bug: September 14th - Post Mortem - HackMD Not sure how this is Kristie’s fault…?

Also I would disagree, seems to me that we have some leadership (finally) and a team that are focussed on delivering a product.

First, it’s only my opinion. Great if you or others found a leader in Kristie.

Second, I am referring to the 32-hours hard fork with 0 preparation for operators. Who forgot to tell the community that their keys expire? Or who forgot that this is going to happen? (1 week pre-expiry of more than 30% voting stake is a bit sharp don’t you think? But offtopic here and could be responsibility of operators themselves.)