UClans – geolocation social network, which uses the blockchain for various types of interactions

UClans - is a geolocation social network, which uses the blockchain for various types of interactions. Unlike other social networks, UClans creates interaction within the network and in the real world. It consist of the UClans mobile application and platform.

UClans can help users for quick interaction and integration into groups – clans. Using the geolocation mobile application, the user sees a map with the display of all users, their activity, online and offline tasks, activities, events and games.Users can find activities anywhere in the world. It is very convenient for traveling.

The basis of interaction in the network is the user’s rating, which is formed on the basis of feedback on his activities and is stored using the blockchain. This makes it possible to form a real rating, without the possibility of markups and other falsifications.

The main type of interaction within the network is: online and offline tasks,participation in events, competition and games, the formation of clans, finding new friends, communication and sharing content in a secure p2p chat.
To find interesting information and perform various activities, users indicate their basic skills, which can be confirmed by other users.
For the activity in the network, users receive UCL tokens, which can be exchanged for various goods and services on the platform and in the network of partners. In addition, tokens can be stored in a convenient internal wallet and eventually exchanged on the market.

UClans ecosystem designed to build, reflect and organize social relationships on the Internet

The UClans geolocation network was founded by combining technical, financial and creative minds that have already implemented projects related in social networks.

The team analyzed the problems caused by the peculiarities of social networks. Communication in the virtual world is addictive, develops idealization, affects the emotional background of people. However, the main problem is the growing number of new platforms, only for interaction in the network, which increasingly leads to real life in the virtual.

Thus, we started to develop the UClans network, which will help to solve the described problems.
The introduction of blockchain technology changes the concept of virtual space. This also apples to social networks. New approaches allowed to create more secure environment for the users in the Internet. As an example, decentralization reduces the amount of misuse of the user’s personal data. Blockchain protects from redaction, helps to monitor the advertising and form the real user ratings.

In a broad sense, blockchain today is associated with the cryptocurrency. The possibilities of digital money form a new kind of economy. Each user of the global network can monetize his activities and receive cryptocurrency. This trend is becoming popular and a cryptocurrency payment system is being introduced in many socio-economic processes.

The ecosystem consists of the United Clans platform and the mobile application Uclans.

The information about clans, mass games, competitions will be published on the platform United Clans.

To start using the UClans application, you need to install it on your mobile phone and undergo a simple verification. After logging in, the users can interact with each other to exchange information or values. UClans assumes interaction on the principle of user-user, user-group, group-group.

User-user interaction is the accomplishment of tasks, the order of services, search and registration in various events, the exchange of content, adding to the lists of friends or subscribers, the formation of a rating, the confirmation of professional skills.

The user-group interaction provides for the possibility of joining the clan by interests, access to thematic content, participation in events, competitions, voting for a clan you like.

As the rating increases, the user will be exposed to more and more tasks and additional services of Uclans. In addition to tasks, the user sees available activities nearby, can search and chat with friends. To attract attention to himself, the user can publish content or available to everyone status.

To obtain the information of interest, each user can find a clan that he would like to join. The terms of joining the clan are determined by the group itself, by filling in the standard form and specifying its own parameters when creating it.

Clans serve not only to unite people in the online space, but also to create meetings, games, competitions, quests, olympiads outside the online space. Clans can be registered as groups of people with similar interests, and commercial organizations. When creating a community, the organizers draw a flag or upload an existing picture, logo. Then they fill out the form with default parameters, come up with their own rules, if they do not have illegal intentions, this is the manifest using which any user can join the clan. They have different capabilities for interacting online and offline.

The goal of each clan is to develop their community, increase the number of users, conduct events, and receive tokens.

All calculations on the platform and in the mobile application are carried out using the digital token UCL. When registering, the user automatically gets an inner wallet to store tokens and conduct various transactions. 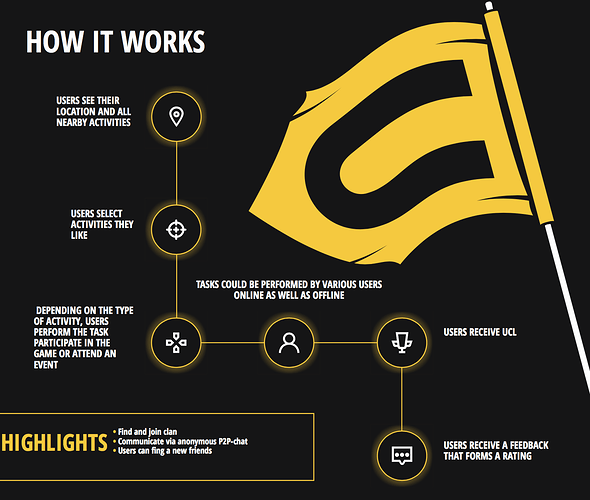 UCL is a token issued on the NEM blockchain, which is the main crypto currency of the UClans application.

The UCL token is an utility and is used only on the UClans network. The main function of the token is the ability to exchange it for a product or service. The use of the token is possible between users, between the user and UClans, in the network of partners.

Monetization of UCL directly depends on the number of users of the social network.

The main source of income of UClans is advertising.

In addition, users can use the UCL token to additionally expand their capabilities: increase the number of skills to 10, pay a closed profile service, buy invisibility mode. With future updates, the number of paid services of UClans can increase. In addition, UClans provides for payment by the UCL token of various functions related to the interaction between users. So, we are talking about paying for assignments, paying for participation in an event, paying for participation in games. Using NEM’s blockchain, transactions between users are free. UClans does not provide any fees or additional payments for the performance of these functions. The development of UClans in different countries allows users to use the token during their travels.

The popularity of social networks is increasing, which is expressed in the number of users.

UClans is a social network of the new generation, which is aimed at high-quality user interaction. In addition, UClans stimulates users to go beyond the boundaries of the virtual world into the real world.

UClans positions itself as associating network-contactor. By associating people on the platform, people can interact with new people, using communication, grouping, helping each other to solve the problems. The motivational factor for attracting new users is the possibility of a quick earning of UCL’s crypto currency, which can be exchanged for goods or services.

In 2028, UClans plans to attract about 1 billion users. With the number of attracted users, the social network will increase and expand the functionality.

We are glad to answer all your question!

Number 1… Mission.
Can you post it in a readable format so we don’t have to scroll sideways to read 1 line.
cheers