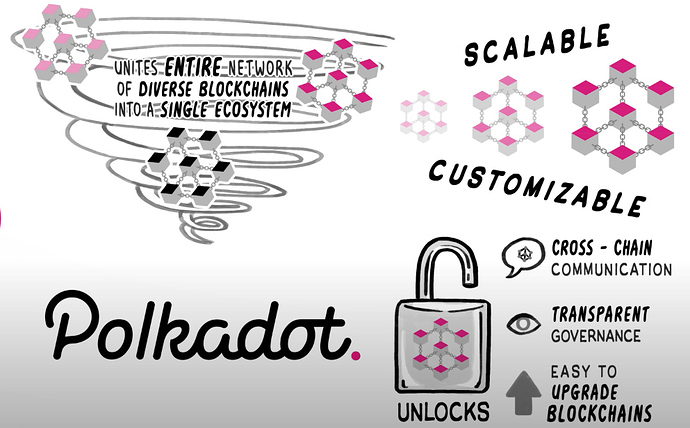 So Polkadot has that concept of para-chains (chains running in parallel) which are in essence the shards which we’ve been hearing about from the Ethereum world. Gavin&Co. connect all the para-chains to the relay-chain (the main Polkadot stem chain) to allow inter-chain swaps and controlled information exchange. They added “bridge” features to allow interlinking with non-Polkadot blockchains, too.

I am hereby bringing forward the idea to

There are Polkadot grants for establishing bridges to other blockchains. See
https://github.com/w3f/General-Grants-Program and https://polkadot.network/community/ (bottom left)

IMHO - Above idea(s) would create tremendous added value to SYMBOL.

What do you guys think? You - as in both the community and NEM Group?

There isn’t a lot of blockchains that I think are doing enough to add value to the greater ecosystem but Polkadot van very well be one exception and is studying more I think.

Interestingly, Makoto’s Soramitsu already dove into this and did engage in that sense and developed Polkaswap, applying a Web3 Foundation grant. (Press release: https://soramitsu.co.jp/polkaswap_press_release ).
And the SORA blockchain, a (quote:)“decentralized economic system for the world”, will be interoperable with Polkadot.
Honestly, let’s consider to “connect”.

Thanks and greetings to who “liked” my ideas from this thread. I have already received positive community feedback via Telegram, too. But so far, nothing more than “thumbs up” and “confirmed interest” in such solution.
Unfortunately, I don’t have the resources to do the necessary work myself.

May I ask for a comment from NEM Group and other decision makers whether there is interest to pursue this further. The publicity this would bring can be very welcome for the Symbol Launch, too. Don’t you agree?

Hi @r3n3 thanks for flagging the above.

Personally, I like Polkadot and have been keeping an eye on their progress for a couple of years, they are doing some great stuff and the bridge idea is definitely a good step forward. It reminds me a bit of the approach you also see in Kyber and in Ren.

In terms of having it in the ecosystem, I’d support the idea and agree it would create great value for Symbol. I have a list of 15-20 product ideas I’ve been collecting, either from TG/forum/twitter or my own ones, so that we can start looking at which are possible, priorities etc as Nem Software gets going on things other than launch.

Challenge between now and launch is that the teams have pretty full backlogs of things that need to happen to make sure Symbol launches so its unlikely NSL will have capacity to add to them before launch. But if the community were to pull a team together and go for the grant, I would certainly support and be more than happy to make as much noise about the connection.

There are a few others that are worth considering, each of which has different cost/benefit of the efforts, I haven’t heard of grants for them (but havent looked either)

Probably a good start point for anyone looking at it would be to get a good understanding of the Using a secret lock transaction for an atomic cross-chain swap - NEM Catapult 101 and assess which other chains support the opposite side of it. In the case of Polkadot, I would imagine deploying the bridge connector to their chain would give the opposite side.

But basically, yes Rene, this is something that would be great for the ecosystem and if you want to pull it together, I’d would be happy to support the effort, its just not something thats likely to be in the NSL delivery capacity pre launch for our dev teams specifically, post launch, whole different conversation I think.

@gevs Would this perhaps be of interest for you to look into? LuxTag might support you with this, and then there are the W3F grant programs.
Greetings, Rene

Actually, I don’t want to reopen the discussion about the SF.
But maybe it would finally be time to use a small part of the SF for this. We could let the community vote (NEM wallet).
That would help NEM, but also the community. Plus, that would help the dev´s we shouldn’t lose.

Thank you for the mention @r3n3. My company will reach out about potential partnerships in execution.

Also would love to see projects open for contributions to the community. Some of these thoughts are good to hold in a NIP.

Am very glad to see you looking into this. Let me know if you needed anything from my side. For example we as LuxTag might become one of the test-pilot users of such bridge system.