@gimer shared a very interesting forum post on the JP side of Catapult demonstrating the use of the new secret lock transaction for an atomic, cross-chain swap: 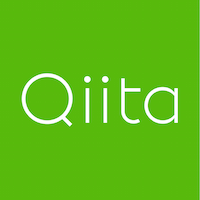 I found this quite interesting. I found it even interesting that there weren’t many posts in this forum. In response to that I have decided to start a series of posts called Catapult 101, where I break down various Catapult concepts for the layman to understand

I don’t only want to discuss it, but demonstrate it using NEM2.

Here is the first installment from the aforementioned article, in proper English so we can discuss it!

Suppose you have two different MIJIN_TEST chains. A "Public Chain" (i.e NEM) and a "Private Chain" (i.e crackTheCode Chain), respectively. Let's refer to the private chain as `A` and the public chain as `B`

In short, they want to perform a cross-chain transaction, exchanging XEM for a mosaic (or vice versa)

Now, if Alice and Bob both trust each other with no problems, then they can simply peform a transfer transaction on each chain.

In our scenario, however, they don’t trust each other. This is where secret lock transactions come into play!

This is where the secret lock and proof transactions come into play in a trustless environment as stated here, where mosaics are locked, or unlocked, with a secret value only shared between Bob and Alice.

There is no trust because Bob could take off with Alice’s mosaic without sending his. The secret transaction essentially holds it in escrow until both secrets are entered in their respective chains. If the secret is never entered, the funds get returned to their owners.

Like a transfer transaction, a secret lock transaction can send mosaics. The difference, however, is that it has to be unlocked via a secret proof transaction.

A secret lock transaction has a hash of a secret value embedded within it, similar to a message. If you can prove that you know the secret value via a secret proof transaction, you can receive the mosaic being sent.

It requires the common secret shared between the two parties (Bob and Alice) to unlock. 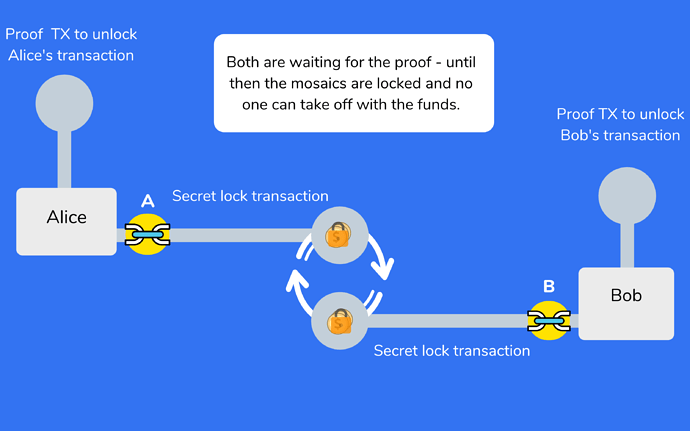 As you can see, this type of cross-chain exchange is possible. In total four transactions are required to make this transfer. Secret lock transactions help to avoid fraud if one or more parties do not trust each other.

The possibilities - not just currency exchange

While here a cross-chain exchange was performed, this method can be used to communicate between chains through sending messages, or even for holding funds in escrow between a private chain and public NEM chain for a house purchase until the deal is closed! There are many ways this can be utilized :smile:

Now see how you can try it out yourself!
Coming soon

aggregate is only good on the same chain. You need the secret lock for x-chain tx.

Ok… But in that case other chain say ethereum should also have similar functionality for this transaction to succeed… Right??

Most chains do. In Eth you’d probably have to write a smart contract.
All you really need is a way to lock funds until a certain secret is revealed.

@crackTheCode Great idea to start doing Catapult 101 series of post! I like how you explained the guide and @planethouki figures.

We could add value to the current docs as well while creating this series of post. nem2-docs is open-source and can be improved a lot from the community.

Thank you! I thought it would be a good thing to do for the community and for myself! @planethouki did an amazing job explaining this.

I am writing up this code example only with more screenshots so even a beginner developer can try this out. Good to know the docs are open-source! I would love to improve parts of it as I learn

Thank you for explaining that

The last part in the documentation (Is it atomic) is somewhat confusing:

With this description, I understand that Alice gets Bob’s funds as soon as she sends Tx3. Which leads to non-atomicity as she could have given a false proof value to Bob, which then would never get his funds. I suppose the wording in that part that can be improved. My understanding was that Alice and Bob get their respective funds once both Tx3 and Tx4 are signed. Can someone confirm?

She could have given a false proof value to Bob.

Alice announced Tx3, so Bob can check in the private network the transaction and get the secret.

Bob, or any other person, even Alice, can unlock Tx2 funds by sending Tx4. It doesn’t matter who sends the last secret proof transaction, the funds will be transfered to Bob, as defined in Tx1.

It will be even more evident if Bob started the atomic swap, and Tx3 is announced to the public network instead, ensuring the secret it is visible to everyone.

From the links I assume, two transactions are independent per se it is the users/actors in this case Alice and Bob make it an atomic swap… Is my assumption correct??

Yes, pretty sure you are.

Now that I’ve actually read your documentation (lol, sorry) I don’t think it’s entirely correct.
You make it sound like Alice and Bob create different secrets which I don’t think is the case.

The docmentation uses poor nomenclature as the secret isn’t actually secret but the proof is. I’m going to stick to calling what’s secret, secret and use the word proof for the process of revealing that secret.

If they did it like you’re suggesting then they’d have a big problem: Who sends the proof first and how do you guarantee that the other party plays along ? You write:

They send each other the secrets required to unlock the funds.

That’s the whole problem that this is trying to solve and if they create seperate secret’s it isn’t being solved. Does Bob send first or Alice ? What if the other party doesn’t send their’s in return ?

Thank you for that, yes I believe I did misrepresent it by saying two secrets are involved, In reality, just one is and is used throughout the entire transaction. I have made an edit, please let me know if you have any problems with it, thanks!