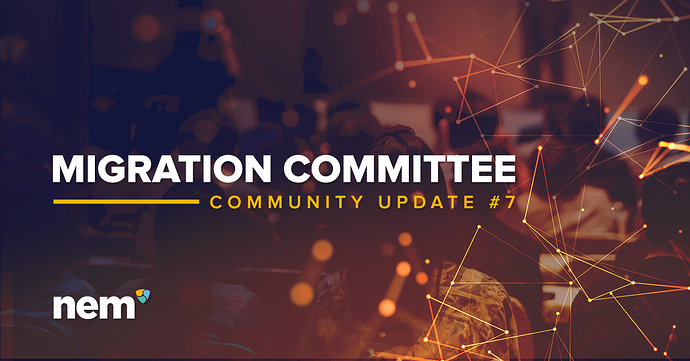 The migration team is proposing that every account has to opt-in to receive Catapult tokens. This includes multi-sig and non-multi-sig accounts. Accounts won’t receive Catapult tokens or multi-sig configurations unless they opt-in. Accounts can opt-in either before or after public chain launch. For those who wait until after launch, their Catapult tokens will be held in a nominated account until they are claimed when the owner opts-in. The process/entity for managing these unclaimed tokens will defined and communicated prior to launch. After a specified period (6 years is the current assumption due to statute of limitations) the proposal is to work with the community to decide what should be done with the unclaimed tokens - likely to be either a Burn or a Block Reward distribution.

Branding updates can be found in the NEM Forums (here).

Various members of the community, migration committee, and supernode holders group have expressed ideas/preferences. This information and various modelling has now been completed and compiled into a concrete proposal which has been reviewed by the Migration Committee and Core Team. It is broadly accepted with some minor suggestions and has now been shared with the SuperNode holders group prior to being shared more widely by 9th Dec 2019. It has been shared with the SN group first because the SN Reward Program will undergo some substantial changes and their input is required to ensure it is well understood and agreed prior to becoming a formal public proposal. Early feedback is positive and the proposal will be shared publicly before the 9th Dec if practical.

Is this still on track? I mean can you please update the timeline ? The projected timeline looks difficult. Especially with the testnet and wallet.

Still on track. This is the latest update with corresponding timeline. Wallets are going well, testnet not far off.

When can I take action to migrate my XEM to the new chain? How can I see quickly if the time is there to take action? Thanks

When can I take action to migrate my XEM to the new chain? How can I see quickly if the time is there to take action? Thanks

There should be clear and specific instructions on how you can opt in. In terms on when you can opt in and when the instructions would be communicated, the post says ‘before or after’ public chain launch. This means that it will likely be some time around Feb-March 2020 which is the future milestone launch date.

Also, it is not really a ‘migration of XEM to the new chain’. XEM stays with the NIS Chain and you will have the opportunity to opt-in for Catapult tokens in a nominated account on the new chain.

. Accounts can opt-in either before or after public chain launch. For those who wait until after launch, their Catapult tokens will be held in a nominated account until they are claimed when the owner opts-in. The process/entity for managing these unclaimed tokens will defined and communicated prior to launch. After a specified period (6 years is the current assumption due to statute of limitations) the proposal is to work with the community to decide what should be done with the unclaimed tokens - likely to be either a Burn or a Block Reward distribution.

Thanks for working on this migration comittee, looking forward to start 2020 with good news.

Overall I agree with the proposal.
But in the past years I even forgot that NEM is a blockchain project with a voting plugin.
When are we going to vote for these proposals? Or does forum/Twitter discussion with anonymous bots suffice?
Or we go for opt-in because devs don’t like lazy holders?

I am proposing to do a blockchain vote on opt-in/out. This could be a multiple choice vote on

For the tokenomics I propose a yes/no vote.

Two summary proposals encompassing all three elements is drafted and put to the community for a decision. One will encompass tokenomics and migration while the other will revolve around branding. If it is rejected then it will be reworked but this may impact Q1 2020 launch and that must be balanced to avoid as a priority

Presumably, that is a vote on-chain, like most other votes have been. Afaik they’ve only been collecting feedback so far.

Yes the votes will be POI.

So we will have Wallets ready on 12th Dec and 2 days after RC ready, we will have test net. That means When the RC is ready which is an ongoing process. Any idea when they will complete the RC?

Pinging @gevs who can give more insight on the timing for testnet.

when the screenshot of the accounts? I’ve got it in the nano wallet 2.0.14 , Is there a problem?

Snapshot has not been announced yet. Once the date of snapshot is known, it will be shared with community across our channels.

Our latest desktop wallet version already includes an automatic connection to what will be the testnet nodes. Currently the testnet is not not definitive, that is because it will for sure need more resets as we are moving forward with RC readiness.

Okay. So basically you don’t have a timeline. And you’re the project manager ?

I would like to leave my email address somewhere to get alerted immediately when I can take action to move from NIS1 to Catapult, with instructions. Also instructions for running a node would be nice.

There will be instructions on running a node, how to opt-in and the key items. As for getting alerts one option is to sign up to receive regular emails news updates here or on the forums or Telegram at t.me/newsonnem

When were the new council members elected?

The next elections will be in a year

Anyone has any update about the wallets, testnet anything???

No updates. No actual timeline. What’s going on? Is this going nowhere? Little concerned after multiple launch failure. I don’t really care about desktop wallet because I know it’s ready for some time but where is the other development updates? Why committee is not updating this before the due date? No responsibility?