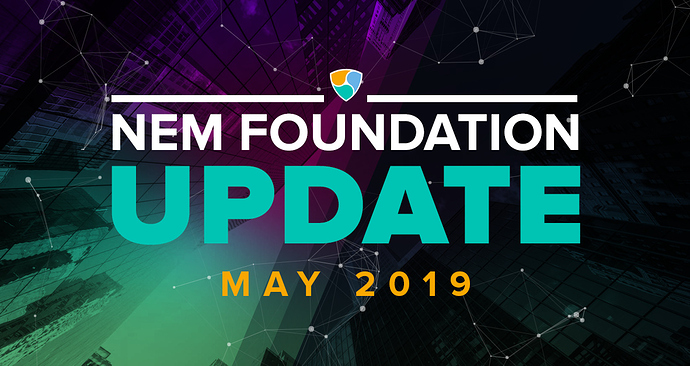 Dear Community,
This is a May update to share the latest progress made as we move forward in the transition and restructuring process.

Translations of this update are as follows;

The Council has extended its leadership team by onboarding ‘council invitees’ and advisors who will represent key areas of growth. This is part of the Foundation’s efforts to achieve the goals and objectives in the NEM Foundation Catapult Roadmap and Vision and beyond.

The Interim ExCo and Council Invitees include:

These new appointees and advisors will be invited to attend council meetings on a regular and/or as needed basis. There will not be additional remuneration, they don’t carry voting rights, and will be contributing on top of their existing positions.

Trust Set Up for NEM Foundation

The Foundation is in the process of finalizing a Trust structure to ensure transparency and protection of the utilisation of Foundation funds with a number of individuals who have been appointed to be Trustees, Settlors, and Trust Protectors.

The Trustees are tasked to ensure that the funding is used properly with the Trust Protectors providing an additional layer of oversight. From a funding perspective, the Trust will be a layer on top of the Company Limited by Guarantee structure which is the current set up of NEM.io Foundation Limited which is a legal entity in Singapore.

The NEM Service Providers Program was launched on the NEM Bonfire Portal on 10 April and we’ve received 69+ registrations globally.

The inaugural project open for bidding was the contract to develop the Catapult Mobile Wallet. We have 12 Request For Proposal (RFP) submissions and the proposals are being evaluated with a final outcome by May 10th, 2019.

Steven has been a developer for more than 13 years. He was born and raised in Beijing, China and is currently living in the UK. He has worked for several UK technology companies as a backend developer, a frontend developer, a cloud engineer, and even a database developer.

David (@dgarcia360) helps tech companies to make their products usable for developers. He has been driving Catapult’s technical documentation related efforts since the first open-source release. His mission is to build a documentation culture inside the NEM developer ecosystem.

David is a veteran enterprise consultant and the newest Service Provider to help support the Catapult go-to-market (GTM) strategy for pre-launch, launch, and post-launch activities. David has been involved with NEM for 9 months after being approached by the Ventures team to act as an Advisor to the fund. He continues as senior advisor to NEM Ventures and is now Chair and Trustee of NEM Holdings and Chair of the Investment Committee for NEM Ventures.

This new partnership with David includes the formation of a Steering Group with President Alexandra Tinsman, David Shaw, and Nate D’amico from the Project Management Committee (PMC). The Steering Group will oversee the roll-out of a new market positioning and NEM branding to help create a coherent, common, and compelling message to the market about the real uses of Catapult blockchain technology.

****Wachsman will be leveraging the existing NEM Ventures engagement, who will be supporting with Catapult PR and marketing activities. Wachsman’s portfolio includes notable industry companies such as CoinDesk, Dash, Lisk, Aion, Kraken, Steemit, GBX, and many more.

Kristof will continue his role in 2019 as Chairman of Blockchain For Europe with the initial committee of Ripple, NEM, Bloq, and Fetch. AI. The Blockchain For Europe events are combined with meetings with policymakers to discuss an array of topics regarding blockchain, cryptocurrency, and their associated regulations.

Engagement and highlights across April 2019

The month of April came in with engagements from the leadership team including:

She and Ong Kar Jin from the NEM Blockchain Centre team also presented on the state of cryptocurrency regulations in Malaysia and Southeast Asia at an event hosted by Asia Blockchain Review.

The team in Japan visited Everybody’s Electricity (Minna Denryoku), an electricity provider who pride themselves in leaving a minimal carbon footprint. They have commenced a live traceability solution on the NEM public chain that uses NEM’s public chain to record the amount of electricity consumed and the source of electricity whether it be wind, solar, hydro or biomass. Renewable energy makes up over 75% of the total electricity produced for consumers of Minna Denryoku. This traceability solution provides them with transparency for their end users and plans to be a big contributor towards a greener tomorrow.

The NEM Blockchain Center in Malaysia (NBC) continues its engagement in positioning the center as a regional blockchain hub:

NBC welcomes its newest tenant, TheVault Ltd, which is developing a consensus network and an AI fraud detection system that will protect cryptocurrency transactions from error and theft.

AMA to the Community in May

We will be hosting an ‘Ask Me Anything’ session with the community in late May. We’ll focus on questions around the Catapult Roadmap and Vision and NEM Foundation Sustainability effort. All questions on these topics will be compiled and NEM Foundation will highlight a few updates and progress over the last few months.

We encourage everyone to submit questions here.

As always, we thank the community for their patience and support during this ongoing restructure and look forward to sharing more news and consistent updates on progress with you in the future.

Hi,
First, Thanks for progress,
You said that we are joining to “Token Taxonomy Initiative”, as far as i know it’s a Enterprise Ethereum-based(EEA) blockchain, Is that mean NEM has a plan to migrate on Ethereum??!

Thanks for the question.
Its a lobbying group for blockchains that was initiated by the Etherium Alliance but is ‘blockchain neutral’. Article NEM Foundation is very keen to be at the forefront of defining just what constitutes a ‘token’ and is very excited to work with this initiative. The future is interoperability and working together across chains.
I don’t quite understand your question about migrating to Etherium as NEM is a platform in and of itself, and as such, cannot ‘migrate’ away.

I got the answer, so EEA should add NEM’s name to EEA member list page, its effective for adv:
https://entethalliance.org/members/

I think there is a bit of a misunderstanding. We are not a member of the EEA but of the TTI. They are separate things.
https://entethalliance.org/participate/token-taxonomy-initiative/

The team in Japan

Who? Rio?
I am Japanese but I do not know Japanese team.
Please tell us why you do not disclose information.

Hi God Tanu, sorry for the delay. Yes Rio is part of the Japan team, and Ayako is a part time consultant. There are plans to build out the team in the future and we apologize that it wasn’t explained fully.
Thank you for your patience.

Hello?
June will be over

June will be over, yes, but we will still be sending out update before it ends! Thanks for your patience. As I mentioned in Red, we’ve got a big update this time. Lots to share. Appreciate the support, God Tanu.

[image] Dear community, We’ve been keeping busy this month as we work towards the impending Catapult launch this Fall. Here’s the latest progress made by the NEM Foundation. Translations Chinese - here Spanish - here Russian - here Japanese - here Italian - here NEM Foundation Roadmap and Catapult Update As the launch of Catapult inches closer towards, we are pleased to provide a few updates: The Catapult Developer Center is being developed. It contains tools and a knowledge base, in…