It is time for a ready-to-rock open source Multiplayer Pacman Game using the NEM Blockchain.

Let me introduce you to PacNEM - https://www.pacnem.com - a semi-autonomous[1] Game rewarding Players and Sponsors in NEM Blockchain Mosaics.

Following source code is open sources for the PacNEM project:

The following period of 1 Month will serve as a Beta Test for the Game running on the Testnet during this period. After the Beta period, the game will be using the NEM Blockchain Mainnet. The test period can and will be extended in case serious bugs are detected that require longer work.

The game features the following modules:

I would appreciate anyone testing this Game. It aims to be published open source and using the Mainnet to showcase the easiness of integration of NEM features with real world Tokens and Blockchain features Ideas.

Don’t hesitate testing out real world cases such as : Not paying enough, Paying in multiple payments, Quiting the game during Play, etc. Anything, this is a beta test and any bugs should be addressed correctly.

[1] The game is said to be semi-autonomous because human-factor is only required in terms of Backend Administration of the game functioning and Funding the PacNEM Business Account.
[2] The PacNEM Sponsor Engine is intentionally kept very simple putting the rules as basic as possible where for example an ad view is considered fake in case the same browser generated an ad view less than a minute ago.
[3] The PacNEM Sponsor Engine allows one Browser Sponsored Play Mode Session only to stay connected for 6 page reloads. After those it will automatically reset the Session such that the user changes the selected Sponsor.

is it just me, but when I click ‘Enter’ nothing happens, after filling name/address out?

Got the same issue. After a while it worked and started to initiating but that’s it then…a spinning logo

Yeah, nothing happening for me either. I’m on windows 10 and using firefox. I allowed all scripts for the site but it doesn’t seem to work.

you should see a screen open with an Invoice to Pay. This only works with desktop Browsers.

@patmast3r that is weird should definitely work on Firefox, I just tried login again, did you maybe use your address before on PacNEM? I may need to send you guys a Auth Token because the first time i shared the link (with some people in private) - there was no auth token yet

thinking of it, can I advice to click on Pay per Play - and then enter your user details. Maybe the default selection is blocked by windows

If you don’t click Pay per Play, the game wont initialize, the fact that you dont see anything after Enter might be a hint to that

And thank you already guys! We have had between 30 and 50 Online Games

With periods having 10 people online at the same time, I hope everyone gets his way in

Don’t hesitate to ping me if you still have issues to come in !

Another bug seem to happen on Language - If the bugfix above doesn’t fix your problem, follow one of those links:

I managed to buy cridits and login, but the game wont load when I press play (NEM logo pop up and away again). Chrome, windows 10 here.

should be fixed now when you reload the page

First All Time Best Player found on the NEM Testnet! 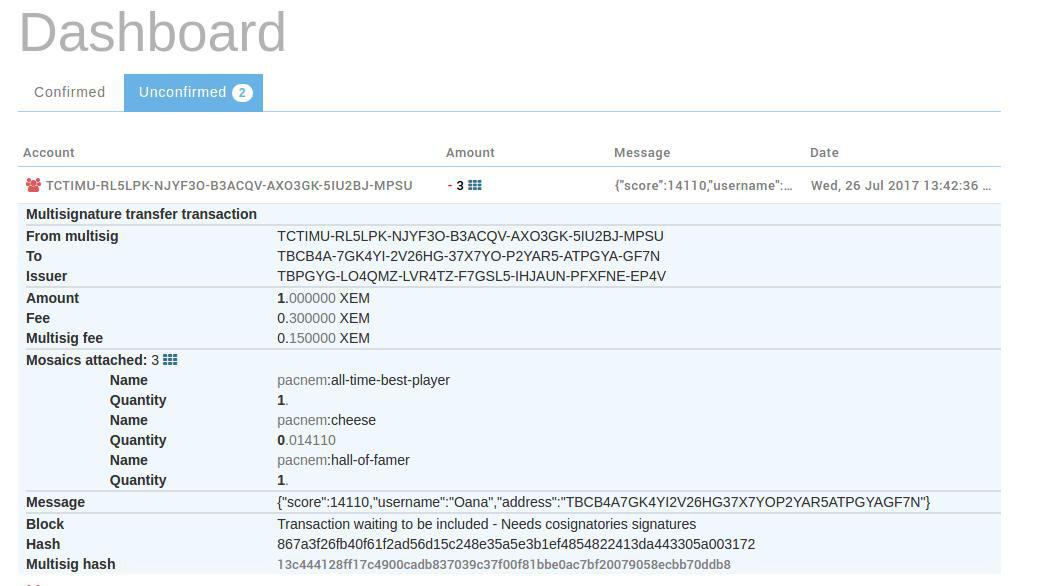 Developing Games or Application with the NEM blockchain and Node.js

A Beginner’s guide to Game or Application Development with the NEM Blockchain...

Wow that’s a really creative game. It’s my taste of game. Is it an apk game to install for PC?

Nope, PacNEM is a Browser game, I still haven’t been able to upload the latest version where it supports Mobile much better than now. Basically no installation is needed for this game, and you can also play with your current wallet.

The mainnet release of the game will be in the next few weeks so that everyone using NEM can actually play the game with their own Wallet as I understand not everyone might have Testnet wallets too.