As communicated on Symbol Launch & Issues Update - 30/12/2020 it has been necessary to delay the Symbol launch, the 14th of January is not now achievable, the new launch will be in February and the exact date will be confirmed in the near future as investigations in ongoing Testnet issues conclude.

Snapshot was set to the same day as launch and is currently 14th January 2021, it is necessary to make a decision if it should more of not, that is happening by PoI vote.

Pre-launch Opt In was due to close on the 9th of January, it has been changed to be the same day as snapshot.

The PoI vote is now live for the Snapshot decision.

Unfortunately it has been necessary to shorten this vote from the normal 3 weeks due to the timescales involved and to ensure there is time to implement the decision correctly. If it were avoidable we would have run it for 3 weeks.

I encourage everyone to get involved in the discussions that will happen, to vote and read and make your own decisions based on what you think the best outcome will be for Symbol and the community.

In the past there has been confusion due to votes being binding/non-binding. For the avoidance of doubt, this vote is BINDING and NGL will implement in accordance with the decision, whatever that decision is

To Vote via Nano Wallet, *you need to update your Nano Wallet to Fix the Voting Module. Latest Builds:

A guide is here: https://docs.nem.io/en/nanowallet/voting-module

The vote is PoI based and will run until 10.00pm on January 8th 2021 (UTC), the general rules for the vote are outlined in the vote description

In response to various comments since the announcement, the below information may be useful

This poll has been getting a lot of interest and votes. It is already over 4.5% total POI.

There are still a few days left to vote.

Here is the latest status from the explorer. 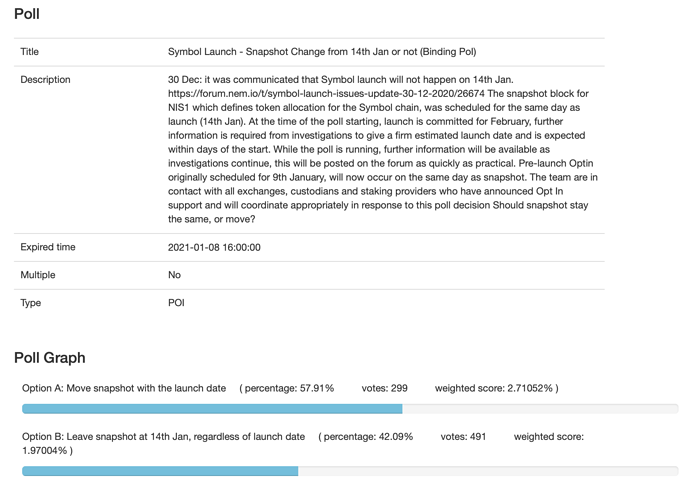