So the payment will be made on a cost recovery basis opposed to models such as Uber who have drivers that are intending to make profit. As a Mobi driver you will be offsetting costs based on distance travelled and this algorithm has been in built in the app.

The rider and driver don’t have the ability to pay cash as it will become tricky so we have implemented a third party payment provider who can process this for us (for the mean time as we hope to implement XEM as a payment model).

Therefore, once the ride has been complete the driver will complete the ride on the app and the distance travelled is calculated based on the shortest route so there isn’t an issue based on drivers taking different routes to increase their fare.

Once the rides are complete the funds will be taken out of the riders account and paid to the drivers on a fortnightly basis.

The rides are placed on a weekly basis so there is no lock in contract and there is the ability to cancel the ride prior to 12 hours.

I hope this helps to answer your question.

I, for one, am super stoked about Mobi’s vision. The fewer cars on the road the better, IMO. Not to mention the number of lives it would save in all probability as well.

It looks like both Mobi and the company I’m a part of brifs.co [https://t.me/brifs] will soon be submitting a proposal for the NCF (NEM Community Fund). When that happens, you better believe that I’ll be voting YES for Mobi!

Cheers, @Anthony_Mobi for inviting me to join the convo and break-a-leg in all that you guys are building!

Thanks @Charlie_Muir! Those are some real benefits we are trying to impact society with!

Building on NEM has allowed many startups to really grow at rapid rates and build a strong community.

If you like I have also written a few articles about NEM and Mobi you can see here. https://medium.com/@callmeishmaell/can-blockchain-benefit-the-environment-8cd605b9da0e

Again, all feedback and questions are very much appreciated as we want to be able to tailor the app around NEM’s community, which is all of you!

As mentioned, Mobi is about making the world more efficient by simply putting more people in less cars!

If you have any feedback on ways you think we can approach this differently or change please let us know.

Please join our telegram https://t.me/mobionnem and join the convo.

If anyone wants to check out our promotion video you can check it out below!

Ok so you have a product/system that you plan to layout.
You are in Australia, so are you going to just outlay this on a major city like Sydney,Brisbane, Adelaide, etc?
I am wondering where is your penetration? the demographics? suburbs? Have you looked at country towns that are growing?
Sorry I have still not yet read the whitepaper, but have you got a specific demographic that you can target with this?
How do you plan to change peoples attitude to ride sharing?
And say if you hit the bigger cities, can you also market to growing country areas or are those people harder to market to?
cheers

hello
i have a question, how many users do you have now?
another thing is, could you replace the pictures with higher resolution?

So with relation to our demographic we actually have a particular user base initially. Our most common demographic will likely be within university space, those who live a fair distance from campus and are quite adaptive to new technology. We are also targeting younger generations within the professional workforce initially as they will be more inclined to use new technology and will generally be quite aware of their costs. We have really narrowed the demographic which we will talk about more in our full proposal.

With relation to your second question, yes in fact we are trialing in a big country town! The app will be trialled in Darwin, NT with the major university campus and two large organisations within the cbd. We’re also looking into Geelong as a good market to enter. Ultimately the larger cities are preferable but there is still a huge portion of people who can benefit off Mobi in regional towns.

With relation to changing people’s attitude towards ridesharing, we feel partly that organisations such as Uber and others have almost paved the way for apps such as Mobi to enter the market and not have to worry too much about changing perception. We feel the hard work is done now that it’s widely acceptable to share a ride in this fashion!

With relation to marketing to smaller towns, it may not necessarily be more difficult but the uptake may be slower. We are basing the approach of Mobi on the assumption that higher density will mean more users as they live closer to each other so with smaller towns there may be less uptake as there are less people to connect with. Keep in mind however that this is still being tested, and with our trial we will be able to get a good understanding on the uptake that smaller country towns may have.

The app is still in its final stages expected to be deployed into the AppStore within the next few days. Internal testing has been complete with trials expected to begin with two organisations and a university campus.

We also have approx. 200 people who have preregistered to use the app once available.

With relation to your query regarding the pictures, of course let me look into this and get back to you.

Great questions guys! We do also have another website that helps explain some more features of the app at www.mobishare.com.au

Also touching on current users, we also have a spoken with multiple universities and organizations who have up to 20,000 students on their campus.

Apologies but I am not able to increase the resolution on the photos. I have however attached the link to our PDF version, which is more clearer to read.

Hi all, Attached is a summary of our upcoming community funding proposal to integrate NEM into Mobi. We are in discussions with the NEM team to have our full proposal available shortly. Please review the attached summary and let us know what you think on the project. NEM Project Summary.pdf (640.8 KB) Also visit our website at www.mobinem.com for more info or join our telegram at https://t.me/mobionnem. Thanks, Anthony

Yes, we have been aware of Chariot for a little while now. They seem to be in their beta stage currently and are just looking to develop feedback for their app.

Definetly moving in a similar pattern as Mobi so will be keeping an eye on their growth.

Thanks for your feedback Samantha! We have noticed a few competitors throughout the world however they are still in their early stages of development also. We are the only carpooling project on NEM and would like to fully utilise the power of blockchain to help propel Mobi as a leading player within the sector! 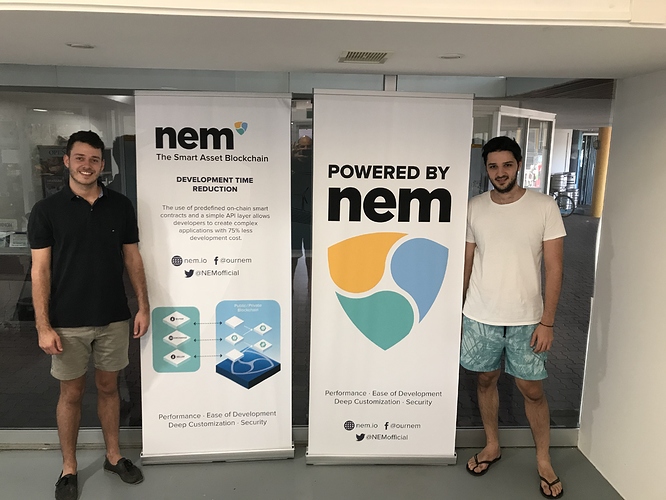 We’re running our Meetup in Darwin, Australia soon! Anyone is more than welcome to come. We’ll keep details posted.

I think this is a great project with real life purpose that can make an improvement in society.
Also trough your project and similar projects that have real life purpose
NEM technology can find real application into the real economy (business) which will
give XEM real value based on usage and features of the technology and not speculation.

Thanks so much! If you have any questions please let us know and if you’d like to stay updated join our Telegram: @mobionnem

I just see Uber has touted “Uber Pool” on youtube.
Pretty much your idea.
From what I gather Uber has to be ultra aggressive to actually take on the taxi industry.
There is your competition now lads.
Cheers