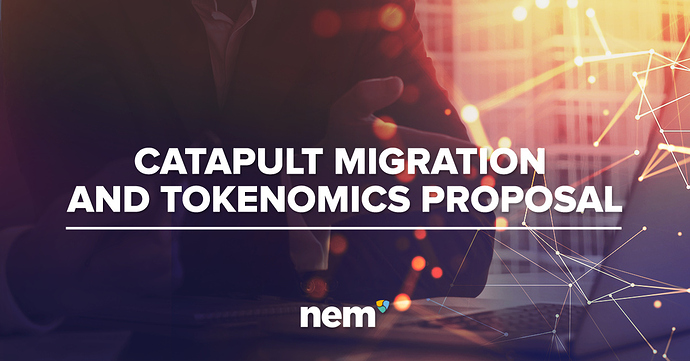 THIS IS THE FINAL PROPOSAL.

We believe this is the right solution, but it comes at a difficult time. If this proposal doesn’t pass, additional rounds of debate will cause further Catapult launch delays. We realize this puts pressure on this vote, and that’s not good, and we apologize for this.

Voting will take place on the NEM public chain using the NEM Wallet.

Please note: In order to vote you must download and upgrade to the latest version of the NEM Wallet (version 2.4.7) found at https://nem.io/downloads/.

The voting process is as follows:

Note: As the branding proposal has not been released or approved yet, the name “Catapult” and “CAT” will remain placeholder names in this document. A branding, naming, and ticker proposal will come separately.

A more detailed migration discussion can be found here.

This proposal is comprised of 4 sections:

This chart compares the % of max supply added (as inflation) per quarter for Bitcoin vs. Catapult’s smoothed match for the first 25 years.

Thank you for your consideration and support!

Please note to vote on the poll with the poll address: NAI6PEPL7RW7FTOQM7SR7SK5DSPVNQRAPTZ5U3A4. 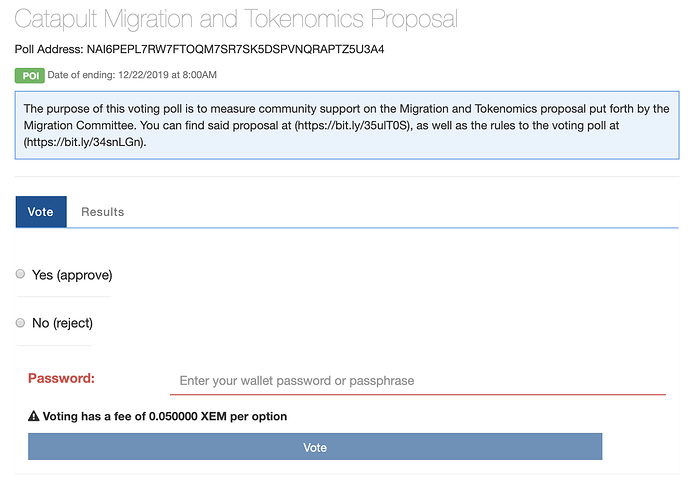 The most important thing to note is to update NEM Wallet to version 2.4.7 or higher.

Really like the inflaction and the supernode rewards for running both Catapult and NEM1.

Please build an Electron app before the deadline (in stead of Universal wallet) so us more careful folk can vote too.

Seeing that that the Nano Wallet is still at 2.3.2, but the Universal wallet is at 2.4.2 causes some concern. I prefer the Electron app. I for one won’t open a wallet in my browser. Not only is it discouraged by everyone who ever lost coins, even Incognito Mode still sends browsing history to google, and every now and then a privacy leak is discovered. Whatever is found next, a browser is a more interesting target than an Electron app.

I’m glad your proposal is approved