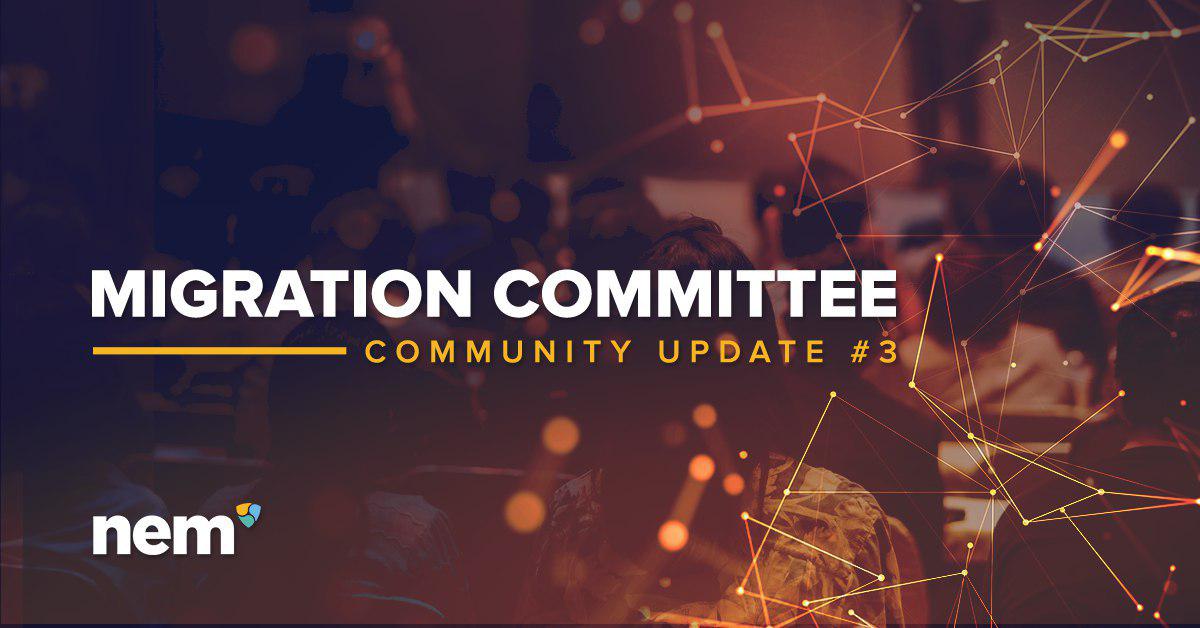 This is a joint message for our community on behalf of the Catapult Migration Group, comprised of the NEM Foundation, NEM Studios, NEM Ventures and Tech Bureau Holdings.

The Migration Committee Community Update 1 was released on 15th Sept following assessment of a variety of options available for the upcoming launch of Catapult and inclusion of existing XEM holders and NIS1 data.

Following that announcement, a lot of community discussion ensued with a variety of constructive input and ideas. One of these was a desire for Super Node holders to be able to express opinions and have discussions in arena that protected anonymity while allowing free and frank discussion to occur. In response to this an Open Letter to Supernode Holders was issued. A group of approx 50 long standing, significantly invested community members joined the discussion over the past 3-4 weeks (and tens of thousands of TG messages!). The net outcome of this approach a refinement of the initial proposal from the migration team. Which is not yet a decision, it is still a recommendation and is being shared here to capture further feedback.

The updated recommendations can be found below:

There are a few subjects that need further discussion and are noted later in the post, I will create a seperate post for each so discussions can happen on topic (please wait for those posts before replying, I will link them here). These primarily need input from a wider cross section of the community before being finalised.

Summary of the Recommended Approach

Catapult be launched as a fresh network and chain, with a subset of data from NIS1 being migrated into it at Nemesis/Genesis block.

The data to be included will be NIS1 token balances on a 1 for 1 basis, Multi Signature Account configuration and Root Namespaces.

This approach necessitates that Catapult and NIS1 run in parallel, which also allows projects to choose to point at which they wish to migrate onto the new chain.

A cross ecosystem support plan will be put in place as part of the migration work to ensure NIS1 stability is maintained as a result, where possible this will be underpinned by the Tokenomics model.

The running of two chains, implies two tokens, one for NIS1 and one for Catapult. These will be named differently and branding work is ongoing to inform this decision.

The following points had broad consensus in the Super Node group but still require further discussion or solutions to be found so are highlighted here. Each of these will have a separate the forum topic created to try and segment the discussion

In addition, there is a broader subject of Tokenomics (for both NIS1 and Catapult) and the Branding work, these will be covered in future updates, for now we are trying to keep focus on the migration mechanisms required to move over to Catapult

thx a lot for update!
i think we have a much better view now what we can expect just little details are missing

I do not understand where to store nem coins in order to get catapult coins.
If coins are stored on the binance and yobit exchanges, how will the catapult coins be credited.
I did not find the answers to these questions.

The most secure way for normal user is to store your XEM on NanoWallet, which you can download from nem.io
Binance maybe give you CAT tokens too, but is ia without warranty. So, if you want to be for 100% sure that you will receive CAT tokens, please send your XEMs from exchanges to your NanoWallet.

It’s about time we agreed on a schedule. No matter which decision is made, the time to introduce Catapult in Q1/2020 is running out.

I do not understand where to store nem coins in order to get catapult coins.
If coins are stored on the binance and yobit exchanges, how will the catapult coins be credited.
I did not find the answers to these questions

Yes. Would like to iterate that coins stored on exchanges are the responsibility of exchanges and it will be up to these exchanges to make the decision.

I would recommend not storing XEM in exchanges especially during the migration process and to have the private keys to your tokens.

It’s about time we agreed on a schedule. No matter which decision is made, the time to introduce Catapult in Q1/2020 is running out.

A cross ecosystem support plan will be put in place as part of the migration work to ensure NIS1 stability is maintained as a result, where possible this will be underpinned by the Tokenomics model.

Would like to see more details on this if possible as well.

I have a question.
That Opt-out means that you “won’t get the tokens” but retain the right to “claim them once you’re ready” in the future. To my best knowledge the main argument in favor of “Opt-Out” was taxation applicable to Airdrops.
Wouldn’t an approach where you DO HAVE access to, but don’t activate (claim) your tokens render the profit-mitigation (tax-mitigation) argument invalid?
Because tokens (only) you have access to, direct or indirect, are yours and yours only. To opt-out of the profit, you would need to opt-out -without- keeping a backdoor for “withdrawing later”. Or am I on the wrong track here.
So, in conclusion, I’d say that an Opt-Out solution can’t be argued for as a tax-mitigation effort.
Correct me if I’m wrong! I might overlook something.
Or in case I’m stating the obvious - sorry for wasting your time